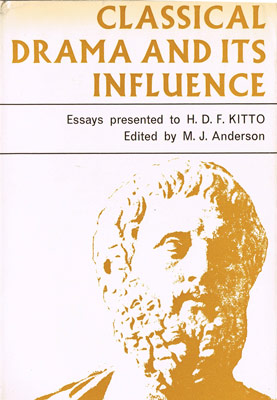 This was a Festschrift, a collection of essays presented to H.D.F.Kitto, acknowledged as one of the world’s leading experts on the Greek theatre. Aylen’s essay, The Vulgarity of Tragedy, deals with the Supplices of Aeschylus, and establishes that, at its climax, there were two dancing choruses of fifty dancers each, presenting an act of attempted rape. Almost certainly there were also fifty attendants present. The rape is interrupted by the arrival of the King, escorted by fifty attendants of his own. The whole scene a riot of colour, and excited, athletic, movement. Generalising from this episode, Aylen advances the thesis that the fifth century plays called tragedies were first and foremost popular, vulgar, entertainment, although they also presented profound insights into the human condition. This essay develops the thought expressed in Greek Tragedy and the Modern World that the drama most closely relating in spirit to the tragedies of the fifth century is not the Tragedy of Racine, but the medieval cycle of the Mystery Plays. This essay presents a stage of Aylen’s thought on the way from Greek Tragedy and the Modern World to his later complete account of fifth century drama in The Greek Theater.