He has created, presented, and acted in, various features for BBC Radio 3 & 4. These include – 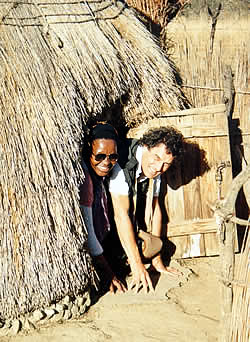 Zulu Dreamtime, a poet's journey through KwaZulu. With Allina Ndebele, tapestry weaver of Zulu stories, whose son's wedding forms a climax to the programme

Zulu Dreamtime (R4): part of the Eyewitness series of poets’ travels, in which Leo returned to where he was born in KwaZulu, South Africa, just after the liberation election of 1994. Encounters with Zulus are linked by Leo’s verse narration, and the programme culminates in a Zulu wedding. The programme aroused so much interest that Leo’s photograph was in three national newspapers, – most unusual for a radio programme.

The central character in Zulu Dreamtime is Allina Ndebele (pictured), who weaves tapestries depicting the traditional Zulu stories her grandmother used to tell her. Allina goes into this traditional hut, which she calls her ‘Spirit Hut’, and where she talks to her grandmother, who has now long since passed away, but who still tells Allina stories. She first met Leo during Apartheid, when he drove her to her remote kraal, through a very violent Zulu thunderstom, pursued b y white racists who could not tolerate a black woman sitting in the front of a white man’s car.

Le Far West (R3); Leo’s new translations of songs by Jacques Brel, acted as mini- dramas by Leo and Caroline John, to Brel’s music played on the piano by Jonathan Cohen, alternating with Brel’s own rendering of the songs, and punctuated with Leo’s translations of Brel’s remarks acted by Alfred Molina.

An Unconquered God (R3); Leo’s translations from classical Greek poetry on the subject of love and sex, performed by him and Sara Kestelman.

Dancing Bach (R3); Leo as poet and church organist presents five of Bach’s chorale preludes to choreographer Terry Gilbert, who devises dance numbers to them, and to children who give their own pictorial reactions to the music; this is intercut with the reactions of theologians and musicians, including the Bach expert, David Stancliffe, Bishop of Salisbury. 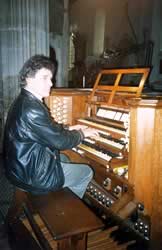 At the organ of Holy Trinity, Bradford on Avon 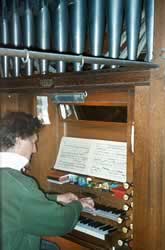 At the organ of St Bartholemew's, Corsham

Leo has played the organ for a number of London churches, and, most recently, for Holy Trinity, Bradford on Avon, and St Bartholemew’s, Corsham. Most of the music for Dancing Bach came from disc, but Leo himself played one of the chorale preludes on an organ in an outer London church built to the same specifications as the organs Bach himself played.

Leo devised Poetry in Action (R3), nominated for the Sony awards, of which three series were transmitted, in 1993, 1994, 1995. In these series, themed anthologies of poems, on subjects of social interest like transport and housing, were intercut with documentary actuality from BBC archives.

Leo was heard regularly on Radio 4, Anderson Country & The Afternoon Shift, from 1995 – 1997, where he created poems out of current news stories. In 1998 he did the same thing on The Today Programme.

His translation of The Birds by Aristophanes was performed twice on BBC Radio 3.

He has also worked as a director in BBC Education, directing a contemporary version of his translation of The Birds, and creating Courtship and Marriage in Painting, which won him a BBC Merit Award.

on The Birds
Comedy, poetry, satire, bawdy, and pantomime, combine here to hit the external targets bang on with wisdom, cynicism, and irreverence.

on Le Far West
Wryly observed experience. Using new translations of some of those edgy lyrics, Leo Aylen and Caroline John speak them like the good verse they are.

THE INDEPENDENT ON SUNDAY

Leo Aylen’s life of Jacques Brel, singer, songwriter, film director, and much else besides, tells us everything and nothing about him – nothing because there’s not a smidgen of biographical detail; everything because it suggests that to know his lyrics and his verse and the Piaf-like intensity of his vocal style is to know everything worth knowing about him. Brel’s words cut through life’s illusions like a hot knife through butter.

Le Far West proves that popular songwriting can be pure poetry too.

THE MAIL ON SUNDAY

on Zulu Dreamtime
A rich warm evocation of the spirit of the place, which gives you a sniff of how exciting South African life is now.

The less music the Zulus have in them, we learn, the less human they are considered to be. By this standard, the singing Zulus we hear tonight are human to the nth degree.

Radio documentaries come no more lyrical than this evocation of Zululand. Produced (by Nigel Acheson) as a tapestry of memories and music, spiked with fragments of poetry, interviews and conversation, the whole thing is a portrait of the past and present of one of the most potent of the world’s warrior cultures. The presenter, poet Leo Aylen, is the son of a South African bishop who resisted apartheid and wisely encouraged his son to respect Africans. Pick of the week.

on Dancing Bach
Utterly fascinating. Musicologists unravelled the chorale preludes to reveal the astonishing intricacy of their form, theologians spoke of the scriptural relation between music and text – you could hear the wise virgins scurrying about, trimming their lamps – and children imagined volcanoes and electric chairs as they listened to the harrowing of hell. In short, the programme concluded, Bach meets you on your own terms: if you want a beautiful tune, or gorgeous harmony, or elaborate cleverness, you will find it in Bach.