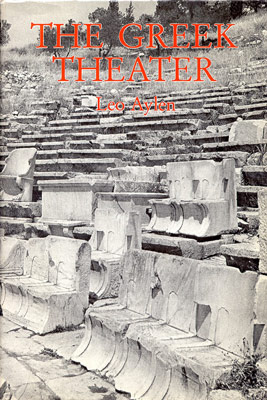 This book is written from the viewpoint of a theatre director contemplating the production of fifth century Athenian plays. It examines every aspect of production, and relates production details to the interpretation of particular plays, and particular moments of climax. It is unlike all other books about the Greek theatre, because of this persistence in relating all the poetry, all points of religion, philosophy, politics, and ethics, presented by these great poets, to the fact that their presentation was part of a competition to an audience of around twenty thousand, and therefore they had to grab the attention and entertain those twenty thousand people.

The centre of Aylen’ s book is his discovery that we can work out the choreography of the chorus dances. The lyrics contain what he calls a “choreographic code.” While we cannot know the precise mime movements of these dances, we can know them “as it were algebraically: if x, then, y, then z.”

Once we can see the way in which these complicated lyrics were staged, our entire appreciation of these plays has to change. We can see exactly how the plays of Aeschylus and Sophocles were indeed primarily dance dramas, in which the dancing chorus is central, the solo actors providing episodes within the dance drama. We can also see how Euripides began to change the form, by increasing the importance of the soloists, and thus beginning the development of modern drama.

There are two aspects of Aylen’s book which command attention. One is his general, polemical emphasis on the sheer uninhibitedness of 5th-century Athenian drama, on the cultural and imaginative affinities between Aristophanes and his supposedly more solemn tragic colleagues. Sophocles breathed the same air as Aristophanes, not the same air as Aristotle. Aylen reads the tragedians from an Aristophanic perspective, as it were, revelling in their riotous colour and verve, their tonal instabilities and unpredictable rhythms, their hospitality to grotesque and burlesque humour. Their heart, he argues, is in the choral dances, and he strains to conjure up how exactly these dances may have looked and sounded and felt. This too commands attention, because while many literary critics have handsomely acknowledged the “centrality” of the choral lyrics through detailed analysis of their densely evocative images and elusive syntax, no one has tried systematically to imagine how these words were given body and motion in the choral dance. Aylen believes that the metrical patterns of these lyrics provide an exact choreographic code, “as detailed and precise as Shakespeare’s built-in instructions to actors as to how to speak his blank verse”. And he proceeds to demonstrate this argument, through closely argued accounts both of climactic moments in a number of different plays, and of whole plays in the case of Prometheus Bound, Antigone and The Frogs. Here, as often throughout the book, he is at his most daringly imaginative and persuasive with Aristophanes.

Aylen writes from the viewpoint of a theatre director about to stage a Greek play rather than a university scholar. Certainly the experience gained in his recitals of his own poetry and his TV documentaries would amply justify the claim that he has combined the ‘two strands of theatrical exploration – the scholar’s and the performer’s’. His central thesis, that he has broken the ‘choreographic code’ of 5th century Greek drama, and that the dance lay at the epicentre of the plays, as written and as performed, is brilliantly documented and argued.