Work with Schools
This page should be read in conjunction with the page titled Creative Writing, since most of that section can be used in schools. In particular, Leo, while working with older teenagers, uses much the same approach as he does with adults.

There are however, a number of exercises and games which have proved effective with children and younger teenagers. 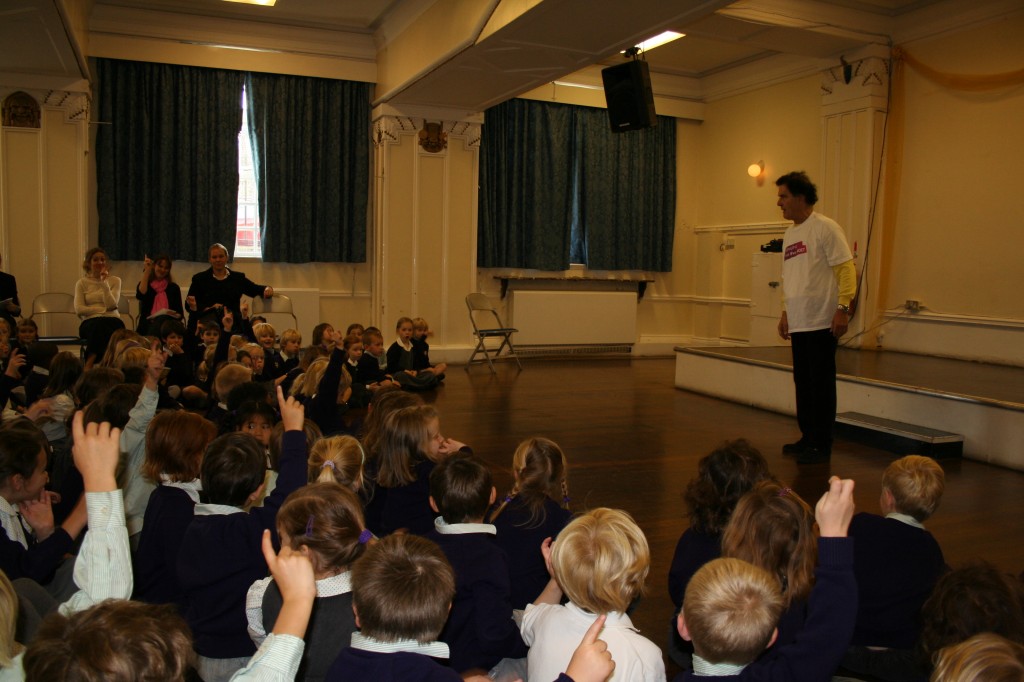 Leo with pupils of Parkgate School

For example, after performing his Rhymoceros poetry show, he is regularly asked to give follow-up workshops. The Rhymoceros book contains a few examples of children’s work in these workshops. One Rhymoceros poem tells a story using words beginning with ‘G’, this has offered a fruitful follow-up in hundreds of workshops, where children are asked to choose a letter of the alphabet – perhaps the first letter of their name – and write a story with words beginning with that letter of their choice. Another Rhymoceros sequence is a set of riddles, where an ordinary boring activity – like washing-up, or putting on shoes- is described obliquely so it turns into surrealist entertainment. Hundreds of children have now enjoyed themselves trying to create similar riddles.

With young children, if the school wishes, Leo encourages follow-up in other art-forms like painting, music, or drama. He always remembers one notable occasion. He had been invited for a week’s festival involving a number of primary schools. The week started with Leo performing DumDum and the Stikkibak Bird, a dramatized poem based on a Grimm folk tale about a sort of holy fool who loves trees and nature, and who finally wins the princess by making her laugh. After the performance, the children were divided, and spent the remainder of the week, one day writing, another doing drama, another music, another painting, changing over so that everyone had a chance of doing everything on offer. The painting day had been allocated to an Art Adviser who had not seen Leo’s performance. He had simply given the children large sheets of paper, and told them to throw paint wherever they wanted on their sheets. When Leo arrived to see what was going on, he had the idea of asking the kids to take another sheet and again throw paint at it, but this time choose a character from DumDum, and create that character in paint splashes. The result was memorable. Wonderful.images of instantly recognisable characters: lively twirls of green, russet, and brown, which brought the leprechaun character to vivid life; fat splodges of gold and purple, which just as emphatically presented us with the overweight pompous duchess. It was one of the most triumphant workshops Leo has ever experienced, though he remarked afterwards at the difficulty for teachers if they had not seen the show; they would be unable enjoy the children’s astonishing depictions of character through the rhythm of colours, and would only see sheets of paper covered with garish and random splodges.

A poem of his, called Somewhere in the Sky, which has been published in six anthologies, recorded by a German company, and used in the Hon Kong Festival of Speech, proviodes interesting opportunities for a follow-up workshop.

Click for Poetry for Children page, and go to Somewhere in the Sky to hear the poem

Leo says the poem came to him like in a dream, and he admits he doesn’t really know what it means. It can seem a happy poem, but it can also seem quite a frightening one.

What does it seem like to you? Happy? Or frightening?

“A voice will declare …” Who is this voice? A wizard? An angel? A demon? A Head teacher?

What does the voice look like? Describe him. Draw a picture of him.

Suppose you had a dream a bit like Leo’s. Not in the sky, but perhaps right at the bottom of the ocean? Or at the top of Everest? Or in the jungle? Or at the North Pole? Or on a planet far, far, away from Earth? Or in the middle of an ants’ nest? What would the voice be like there? Tell us your dream.

These exercises refer to poems in the Rhymoceros book.

The Silly Burglar
First, ask the children to remember what the burglar might have stolen. It is interesting how on nearly every occasion – and Leo Aylen has given this workshop following the Rhymoceros show hundreds of times – they will remember, exactly, all the jewellery. “Six rings, not twelve. Twelve bracelets” And so on. Grown-ups such as teachers find this immediate recollection much harder than children do.
Writing is first remembering, and then imagining. Suppose you are asked to write a story about how your teacher turned into a hamster – you’re not being asked to do that, but suppose you were. You first remember things about the teacher – tall or short, deep voice or high voice, what he/she likes to do, to eat, to wear, etc. You then think about a hamster – what does it look like. You then try and fit the description of the teacher and the description of the hamster together, and that might be fun.
Now, back to the burglar. See if you can make up a story about a burglar who did something very silly.
Leo has heard some smashing burglar stories read out at workshops like this.

The Letter Disease.
Very straightforward. Ask the children to think of a name; they’ll very often come up with their own name. Point out it can be any name. Then if they choose the name David, it will be the D disease, and he will have only to do things beginning with D. If it is Kathy, then things beginning with K.
(Two helpful tips.
1.Don’t let two people in the same group choose the same letter, or, if they do, make them collaborate. Otherwise child A will be trying to see what child B has come up with.
2. Avoid the difficult letters. Hardly any words begin with Z. But not many words begin with J, and there are a lot of J names – Julie, Jo, Joe, Jack, John. Steer them away from J. K also is difficult. If someone chooses Kathy, tell her to use the hard ‘C’ sound as well as letter K, and that offers plenty of opportunity.
Occasionally some children have made up rhyming poems. On the whole let them stick to writing a story.

The Riddles
The exercise is to take some very ordinary activity, even a boring activity – like cleaning your teeth, and turn it into something fantastical.
First have the children suggest boring activities – washing-up, hovering, putting on clothes, or shoes. Etc.
Then ask them to break up the action into short sections. Compare the teeth-cleaning riddle in the Rhymoceros book. Cleaning the teeth divides into 11 scenes:
1.Squeeze the toothpaste tube.
2.Toothpaste oozes out.
3.Toothpaste is put on the toothbrush.
4.The person looks in the bathroom mirror.
5.Turns on the tap..
6.Water comes out of the tap.
7.The person puts the toothbrush under the tap.
8.The toothpaste becomes wet.
9.The person lifts toothbrush to mouth,
10.Puts toothbrush in,
11.The toothpaste froths.

They are unlikely to get 11 stages; 4 or 5 will be ample. It is in a way like writing a movie screenplay, where apparently ordinary actions can be made to seem exciting.

Once they have their basic action (washing-up etc) broken down into several stages, then encourage them to make those stages into some exciting mysterious story – science fiction, fantasy, thriller, and so on. This is the fun part. Encourage them through the breaking-down into stages, by saying that is a necessary preliminary to the exciting part.

It is important to direct them towards action. ‘Watching television’ has never given a good result. Because the interesting thing about watching television is what is on the television; the action is you slumped in front of it.

Once however a girl insisted she wanted to do ‘Going to sleep.’ I warned her she would have terrible difficulty, because going to sleep was not an action. She did have terrible difficulty. The time allotted to the workshop was generous; half the morning and all the afternoon. Poor girl, she covered several sheets of paper in her attempt to make the riddle. She became depressed. Luckily I saw she was in difficulty, and started to read her scribbles. Suddenly in the middle of a mass of rubbish, I saw she had written these words:
“Climb on to a cushion of cloud.”
Absolutely magnificent. One of the best bits of children’s writing I have ever seen. She had no idea she’d hit the jack-pot. I hope I was able to make her see – and make her teachers see how good this was, how a professional poet would have been proud to have written it, and how when one is engaged in creative writing, seven words which really come alive are a great result.

I hope these notes can be of help in workshops.