The Day The Grass Came

Lord Martin Rees, the President of the Royal Society, has said he only gives homo sapiens a 50 – 50 chance of surviving the 21st century. The Day The Grass Came, the title poem of this book, takes Lord Rees’s gloomy prediction seriously. What will happen to Planet Earth? In the poem, human-beings have so domesticated themselves they have become like hamsters in cages or goldfish in tanks. They are ruled meaninglessly by managers who perform mechanical repetitions like robots. Ridiculous of course. But this comedy is balanced on the edge of catastrophe.

Some scientists have suggested the possibility of humans being destroyed but life on earth surviving. There have even been Hollywood movies with that kind of scenario In the poem everything is destroyed, but the grass comes and covers everything.

The poem refers obliquely to Norse legend; it is narrated mostly by Odin, the leader of the gods, who travelled the earth disguised as a workman, and gave one of his eyes in order to gain wisdom. The Norse gods knew they would eventually die, in a world-ending battle with dark forces, led by the great wolf Fenrir, and the poem ends in a confrontation with a wolf figure.

The shorter poems include a sequence from the time when humans first discovered fire, and their locations range from the North American totem pole country, to London’s Brixton, from Pompeii to a Glasgow back street. There is an elegy for the editor of the avant-garde literary magazine Agenda, and a wedding poem for a violinist. The book ends with comedy –Tussauds waxworks, washing-powder wars, Hollywood’s versions of history, and a dream about Buckingham Palace and the Queen’s gold medal for poetry.

Four of the poems published in this book, including the title poem, have won prizes in international competitions.

The visceral intellectualism with which Leo Aylen attacks his subjects is exemplified in The Day The Grass Came, which defines an ambitious work, and – triumphs. The shorter poems are just as impressive.

I’ve just finished reading The Day The Grass Came. I am overwhelmed, thrilled, lit up. Virile, vital, virtuosic. Stupendous. The words demand to be spoken out loud, insist on it; and the underlying connections forging the whole piece into one great organic entity are profound and muscular. The earth moves.

An original voice. A true artist, who responds to the world with an intensity which provides us with a feast for the human spirit. 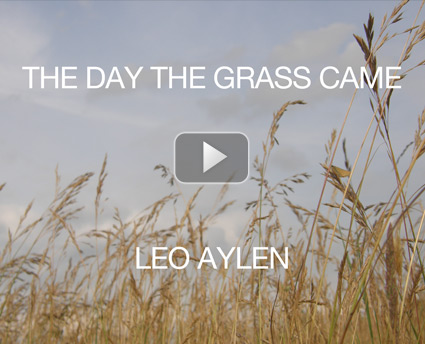 FOR SEQUENCES FROM THE TITLE POEM CLICK ON AWARDS

Would you like a signed copy of The Day The Grass Came? Email leo@leoaylen.com with the name you’d like it dedicated to, and the address to which the book should be posted.

From your Online Banking: —

Payments such as this can be made through any bank, via on-line banking, without charge.