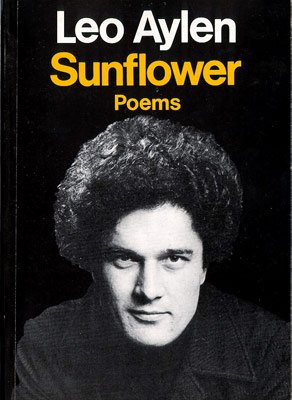 This collection was described as the poetry of a documentary film-maker. More colloquial than I, Odysseus. But not the street talk of Discontinued Design. A diversity of characters, always viewed with interest and compassion. Many of the poems were written in the United States, but some of the victims of society on whom Leo Aylen sheds light and affection are very obviously English – poor old Jones, the schoolteacher side-lined by a trendy newcomer; the boy and girl from Liverpool dockland who meet for one night of casual sex, which turns out not to be casual at all, but the most significant experience of their lives, though they cannot express what is in fact deep love because they do not have the language to do so. The poem was written as a scene for a play, a stage adaptation of an Alun Owen TV play. After Leo had performed the poem to an audience of motor mechanics at a further education college in Oldham, one of them wrote: “Until I heard Leo, I imagined poets as upper class people who were boring to hear, and a complete waste of time. But Leo was great at putting his thoughts across to you, clear and simple”.

Leo Aylen is that rarity, an extraordinarily effective poet whose verse not only cries out to be spoken aloud but which also survives on the printed page to communicate, most tellingly, to the inward ear. His work has vitality, technical agility, considerable subtlety and range. If, as I believe, poetry should be a living organism, demonstrably of the here and now, this is it.

I regard Leo Aylen as being a poet, unusually competent, and unusually sincere. The competence is a part of his mastery of classical poetry and his skill in translating it; the sincerity is his own attitude to life today, concentrated into words that really say what they mean.

Leo Aylen is not afraid of common speech rhythms and lusty colloquial phrases. Feeling, indignant, compassionate, he can sum up a state of mind as well as any novelist. He knows how humanity ticks.

He is highly sensitive; he, as a recorder, can squeeze out and enjoy all the juice that there is in the rhythms and associations of today.

And Betty has nothing to say,
Groping for words down dusty corridors,
Orphan-school corridors where books carried the cane.

Down dusty orphan-school corridors,
Where “Learn-a-pome” was next worse punishment after the strap,
Billy and Betty have nothing to say,
‘Cause language was locked out of their reach in museums,
Labelled “For use by Ladies and Gentlemen only.”

Billy and Betty have nothing to say,
Groping for words in a two-room flat,
Where making love – as opposed to having sex –
Was making sure that the steak was tender,
Scouring the frying-pan to make it shine,
Betty has nothing to say.

And Billy will never see
That putting a knob of butter on tender steaks is making love,
Getting grease up your fingernails for a shiny frying-pan is making love.

And neither will ever be able to say:
We’re not the sort for happy-ever-afters,
But, just for a moment, one Saturday night in Liverpool,
Our love, which is grease grimed into our fingernails,
Engine-grease, and grease from a frying-pan,
This love-grease mixed,
Mixed for a moment, caught fire,
Flamed in the cup of our hands,
As bright as the love marked “Ladies and Gentlemen only.”

Would you like a signed copy of Sunflower? Email leo@leoaylen.com with the name you’d like it dedicated to, and the address to which the book should be posted.

From your Online Banking: —

Payments such as this can be made through any bank, via on-line banking, without charge.